My old i5 4th Generation with 32GB of memory just can’t do it anymore.  It served me well for getting my VCAP-DCD back in vSphere 5.5 and 6.0.  However, with 7.0 launching, my move into vRealize Automation, and well, just the fact it takes an hour for a lab environment to come online, I really needed something with a little more… uhmph.

The new lab-in-a-box is an all new build.  Basically there’s nothing (including the case) that will be reused – which is something strange to me as I’m constantly trying to shoehorn new tech into old gear to save a few dollars.  This time, however, it just didn’t make sense.  So I present to you my lab, “Fermi”:

Yeah, I know… it’s colourful.  It’s so much more “purdy” than most systems one would find in a datacenter.  It’s… a lot.

Q: But why?
A: Because.  Well, when I looked to buy the RAM, it was cheapest to get the sticks with RGB lights embedded.  I mean, when i turned it on I was not expecting how much colour there would be.

Seriously though.  My requirements were to not be bound by CPU, memory, or disk wherever possible. My old system had some very hard constraints:

For an idea of what this looks like before the colours are “activated” (powered up): 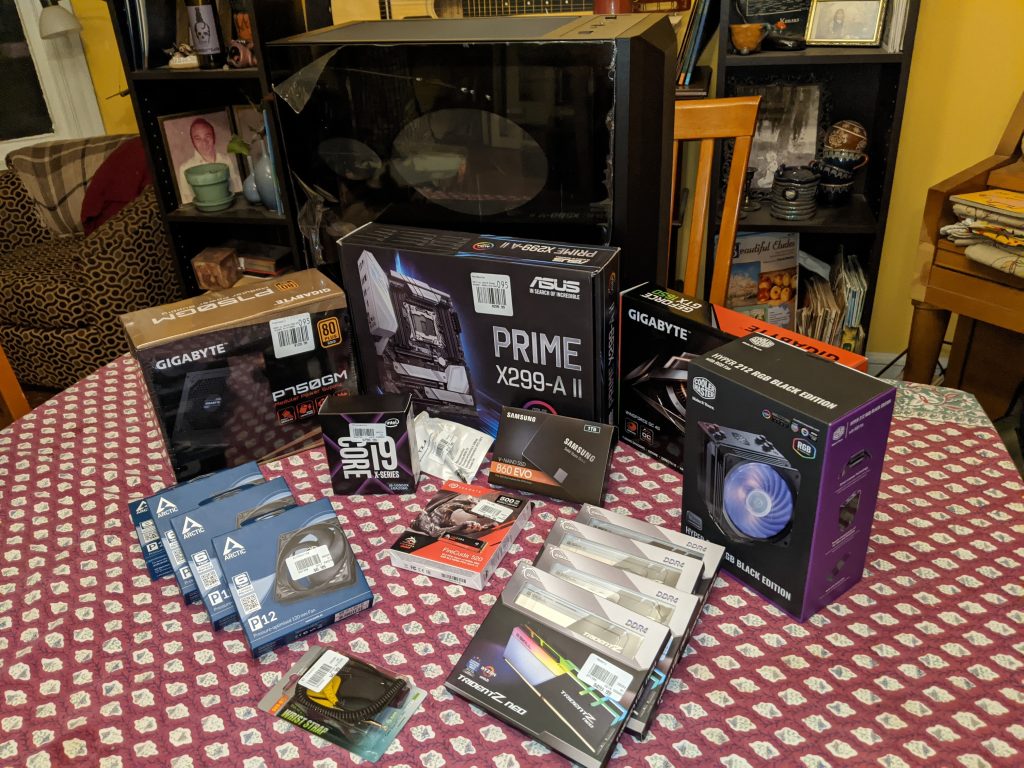 It’s always fun for me to build a new system and it was true this time as well.  Add to that my son spent some time helping me assemble the box and it made a “good build” into an “awesome evening.”  Once it was put together, I installed Windows 10 Pro, installed updates to the OS & drivers, and did some benchmarks.

The assembly was straightforward and we had no issues putting everything together.  I will admit to hide the bulk of the cabling in the zero-space of the chassis, it got a little tight.  Though overall I am exceedingly pleased with the case and components.

Compared to the old system, there simply isn’t a contest – nor should there be.   I used PassMark software to check system benchmarks, I found the old box received low 20-percentile and the new box got to 98-percentile.  The boot time (which honestly, who cares since it’ll be online 24/7) is nearly instant.  And the startup of the main lab systems in VMware Workstation 16 is less than five minutes total (more on the layout in a future article).

Basic thoughts: wow… just wow.  It’s way more usable than the old box and I feel like I should have done this a while back (but had to wait until I could save my pennies to afford it).

Because I only have the one system and I’m leveraging my VMUG EvalExperience licensing, I run all of this in VMware Workstation (VMW) 16 on top of Windows 10.  Of course I know it would be “better” to run ESXi on bare metal, but I’m not there at the moment.

I wish the EvalExperience allowed for more ESXi licenses (or an upgrade to a “pro” level that provides unlocks for everything at enterprise/max features) but here I am bound to what I can do in reality.  So inside VMW, I have a Windows 2019 server running DNS and AD (eval mode), pfSense firewall, ESXi host, and FreeNAS/TrueNAS for iSCSI & NFS LUNs.  If/when I need more than one ESXi host, I’ll deploy one with the eval/timed license.  It’s annoying, but it works for my needs.

Inside the host, I have several VMs (running vCenter, vROps 8.2, LCM, and various “guest VMs” for Windows Server and CentOS.  Those guest VM exist just to show stats and do placeholder-ish work – this is a lab after all.

On question I needed to answer was, “What should I name my lab?”  I really wanted to name it Feynman (pronounced:  Fine-men) after the famed physicist.  However, my fingers find that name hard to type without making typos over and over.  So I went to Fermi, my third favourite physicist (after Feynman and Einstein (Einnie is the name of one of my puppies, so already in use)).  Also, the name “Fermi” as my “lab” is an homage to the particle accelerator “FermiLab” near Chicago, Illinois and has just enough punniness to make me chuckle.

This information should be relevant for a little while for a homebrew vSphere 7 build in 2020/2021 – but we all know how tech changes quickly.  So in a year or more, this will be just another old post of outdated hardware to which I’ll look back at as a fond memory…. 256GB of memory baby! 😉

I will have the vRealize components up soon and start learning more on that ASAP.  Maybe now I’ll make actual updates to this blog (no… probably not).